In my eternal quest to learn Haskell I decided to implement a game in ncurses. 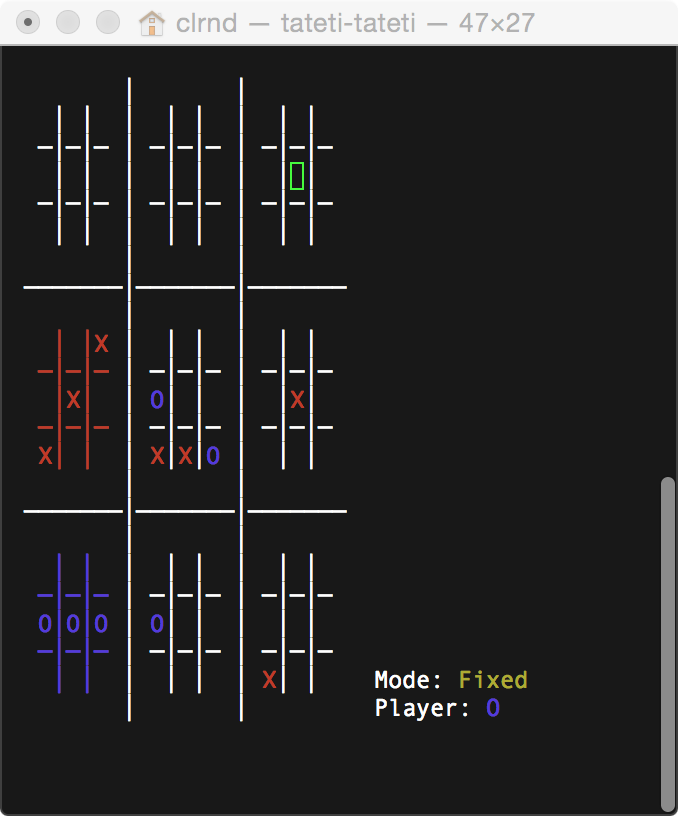 The code is over at GitHub if anyone wants to check it out.

The game is “Ultimate Tic Tac Toe”, a variant on classic 3x3 Tic Tac Toe where inside each of the 9 cells there is another, smaller cell, where actual gameplay takes place. But there is a catch: the sub-board where the player plays is decided by the playing position of the last player’s move!

I came across this game a while ago in this blog post. The link also contains a better explanation of the rules, which you should read for any of this to make sense.

By the way, the main libraries I chose for this project are:

Some types for great programming

This is the main type:

Which means Game a is a Monad that carries a state of type GameState, another Monad inside named Curses, and returns some a.

Convenient fact: Curses is an instance of MonadIO which means we can use liftIO!

Then we have the game state:

This record holds most of the game mutable state, namely:

The game mode is a simple sum type data Mode = Free | Fixed. Free means the player can choose his/her next sub-board (for example in the first turn), where Fixed means they can’t (for example after a valid move from the other player).

Now, notice that funny nested BoardState? Check out the type:

A board is three things:

Thus, the big board is just a board with an array of boards, where each one has inside an array of Maybe Player, because either it’s an empty cell or it has a player’s move.

All this arrays are indexed by the Position type:

Where each letter stands for Top, Middle, Bottom (for Vertical) and Left, Center, Right (for Horizontal).

This means we can have a 3x3 array filled with ones as easily as:

which you can index

And of course, deriving Ix knows how to produce all the Position pairs! Isn’t that just lovely?

I also took the liberty to add a lens for arrays (my first custom lens!):

Imperative programming in the key of Monad

How does this look on action? Well, quite sexy I’d say. This is what happens when a player presses spacebar on a sub-board’s cell:

This code looks very Python/Ruby/Javascript like. The syntax is different, but there is less syntax too. I mean, we are super used to reading stuff like myObj['key'][thing].lol, but that’s just syntax. On the other hand, things like >>= or gBoardState . bsPosition are functions. You can check their types, you can pass them around and put them in a list.

(well yeah, <- is syntax too, but one that applies to every Monad ever not just dictionaries)

The second thing is that zoom is great. With it you force a do block to have access to only a part of the entire state, which of course makes your code simpler to reason about and generally safer!

Drawing with ncurses was also pretty simple. For example, here we draw all the board’s crosses:

Where drawCross takes the size of a cell, a Maybe ColorID and a coordinate offset, and just draws the horizontal and vertical lines.

Since smaller boards get colored when a player wins, we have to get their winners and colors first.

Well that’s pretty big, but if you consider that’s almost everything you need for the main loop, it’s quite interesting.

Also, see that last two lines? If you switch them around you introduce a bug, but don’t fear, GHC will saves us (with -Wall enabled, which you should always do) saying:

This was not my first time with a monad transformer, nor with lenses, but I did learn some things. For example, I could read some lens’ errors!

While I can use lenses, the abstraction is quite … abstract. But this time I think I got a step closer to understanding it.

Testing was quite easy too. Since I could just spit the GameState to stderr (and pipe it to a file), I would start the game with a board full of moves! All of this for free deriving Show and Read instances.

I was also about to build a server/client mode for online multiplayer, but I thought: “if anyone is ever gonna play this online, they surely know how to screen -x”.

In the end, doing something actually playable is always fun :D